You are here: Webwiki > pjbox.co.uk Add your website for free 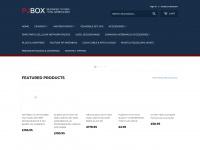 Reviews and ratings of Pjbox.co.uk

A total of 2 reviews for Pjbox.co.uk have been written yet. The most recent reviews are listed below.

I recently placed an order with this company via eBay (Nocando1).

Delivery & dispatch was extremely quick, & packing was reasonable, but after several exchanged messages, I'm thinking that I've been scammed.

I purchased a Zetagi B150 amplifier (silver on eBay listings), but was sent a RM KL200 box without a RM KL200 amplifier inside, but instead had a non-working Zetagi B150 inside in gold. I'm sure the gold B150 is a very old model, so I'm under the impression that he has tried to palm me off with an old defective return.

The owner admitted by eBay messaging that a RM KL200 was sent instead of what I wanted without even asking first which is bad enough, but won't admit that he sent a broken B150 inside the RM box.

I'm about to open a dispute via the eBay returns process & send fully tracked, as I've seen in a few places on forums that the owner can be very abusive & claim returns haven't arrived.

I've bought from here a few times before, but I've been treated awfully for no reason here.


1 of 1 people found this review helpful

I bought a president radio from UAS, pjbox and Nocando1 on ebay (same seller) the radio was perfect, well for a week then the speaker started distorting incoming rx, I contacted Roy who became aggressive saying I should stick the radio where the sun don't shine (I won't repeat the actual phrase). I only enquired about a repair/replacement and he immediately flew off the handle on the phone. I was then sent a barrage of emails saying I would be paying the return postage at full expense. I expected this at worst but not the aggression, cheek and insults I received from there on in.
I feel I should make other people aware of:
pjbox.co.uk
UAS Enterprises
Nocando1 (Ebay)

They are all the same seller based in cornwall

Avoid this seller at all costs.
Rude arrogant unhelpful and basically an unhinged narcissist.
You have been warned

3 of 3 people found this review helpful

Comments on this review

Jim Lee Col­lins after checking order history you have never bought from the site. No phone call ever took place or would i have said such a thing. This is a total lie & statement that i said "stick the radio where the sun don't shine" again 100% untrue .
Total stranger to the truth.

The website with the homepage "P J Box" provides content on the pages Sign In, Cb Radio and Cb Radios. In the following table you'll find the 10 most important pages of Pjbox.co.uk: