You are here: Webwiki > bazpics.co.uk Add your website for free 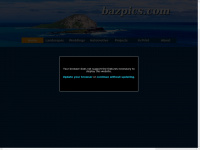 Reviews and ratings of Bazpics.co.uk

Barry Barry is a fictional character from the BBC television drama Waterloo Road, played by Carl Au. He first appears in the eighth series episode "Bad Boy", broadcast on 3 January 2013. The character is introduced as part of the Liverpudlian criminal Barry family with his mother Carol Barry and sisters Dynasty Barry and Kacey Barry. read more

Barry O is specified as the websites creator.

In the following table you'll find the 1 most important pages of Bazpics.co.uk: